Black Shark 4 is one of the gaming smartphones with the most affordable performance levels in the segment under 500$.
Recently, Black Shark, the brand in cooperation with Xiaomi has launched the next generation Black Shark 4 series with many changes and upgrades. Compared to its predecessor, Black Shark 3, the 4th generation this time is no longer too “pitiful”, but the performance of the machine is still strong and comes with many exclusive features to meet the needs. play “hardcore” games of mobile gamers.

Black Shark 4 is currently only available in the domestic Chinese market. The version we have is a standard version, carried directly from China to Vietnam

Unlike its predecessors, Black Shark 4 this year has a less aggressive design, although there are still symmetrical “X”-shaped motifs, these motifs have been designed to sink to the back. and does not exist with the dorsal divided into many arrays like the previous Black Shark 3. Black Shark 4 now looks more like a normal smartphone than a high-end gaming phone

In the center of the back is the familiar “S” logo in the center of the letter “X”. The entire back surface is completed from two sides of curved glossy glass material. The back of the standard version does not integrate typical LED lights, only the Pro version has 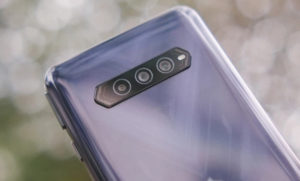 On the front, the screen of the machine also brings a change. Black Shark 4’s screen is now a “mole” screen, not a flawless screen anymore. Most current gaming phones prioritize defect-free screens to provide a complete gaming experience, but it seems for some reason that Black Shark has decided not to do so anymore.

In terms of parameters, this screen is a 6.67-inch Super AMOLED display with Full HD + resolution and a 144Hz refresh rate, HDR10 + support, and a maximum brightness of 1300 nits. In addition, this is also a flat-screen, not a curved screen on the sides.

Despite being equipped with an AMOLED screen, however, the Black Shark 4 uses a side fingerprint sensor integrated into the power button

The bottom edge of the device is the location of the charging port, 3.5mm headphone jack, voice mic, speaker strip. Black Shark 4 is one of the rare gaming smartphones that retains a physical headphone port

The left edge is where the SIM tray, volume keys are located

This physical trigger button, previously only available on the Pro version of the Black Shark 3 series, has now been integrated into the standard version, allowing players to customize actions according to purpose, at the same time. for a better, easier gaming experience

Both trigger button positions are integrated with a lever that allows quick activation when needed, if not in use, these buttons can be “hidden”.

Black Shark 4 is equipped with a Snapdragon 870 chip, an upgraded version of Snapdragon 865. Score test with AnTuTu Benchmark v8, the machine scores about 667,000 points. The Pro version will be powered by a more powerful Snapdragon 888 chip

Black Shark 4 runs on JoyUI 12.5 interface, an interface platform based on Xiaomi’s MIUI 12.5 with many exclusive gaming features.

The device comes pre-installed with the BLACK SHARK interface set with featured wallpapers, icons, and ringtones

Due to the domestic version, Black Shark 4 does not come with Google services that users will have to install manually if they want to use Google. It also comes with quite a few Chinese applications

Black Shark 4 is equipped with a 4500mAh battery and the advantage is that it supports 120W super-fast charging technology that appeared on Mi 10 Ultra. According to the announcement, users only take 17 minutes to fully charge 100% of the battery for the device. Black Shark 4 is the fastest charging power line on the market

With a starting price of $ 385, the Black Shark 4 is a gaming smartphone worth buying for gamers who want a device with both strong performances, many features/game modes in the sub-500 segment. $. If you want even more powerful performance or other features such as LED lights … users can switch to the Pro line, which is currently sold with a starting price of $ 620 (the price is for the Chinese market. National)